We simply loved our three weeks on the Albanian coast, so it was with a slight tear in our eye we headed inland... however as per usual there was almost always some form of water involved in our destinations. This time it was Lake Ohrid, which sits smack on the border between Albania and Macedonia. Our fears of being so far from the ocean were however soon nullified as the stunning lake and bordering mountains revealed themselves... 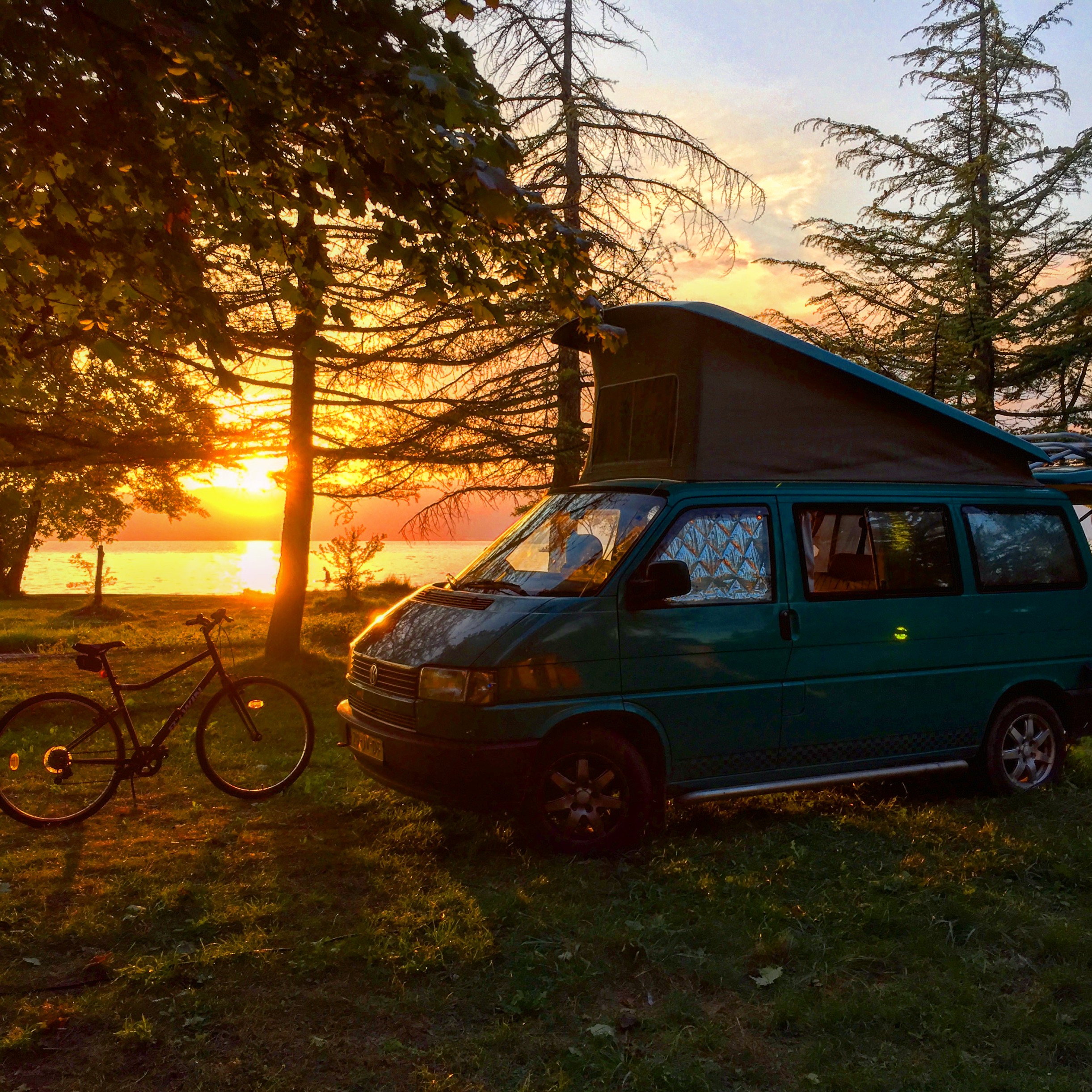 The border crossing at Qaf Thane was relatively quick and easy, but the same cannot be said of the Macedonian roads... wow... these were some of the worst we have encountered on our trip so far. This made us slightly uneasy about where we were actually heading, but luckily our destination was only 30 minutes drive and we would arrive easily before sunset. 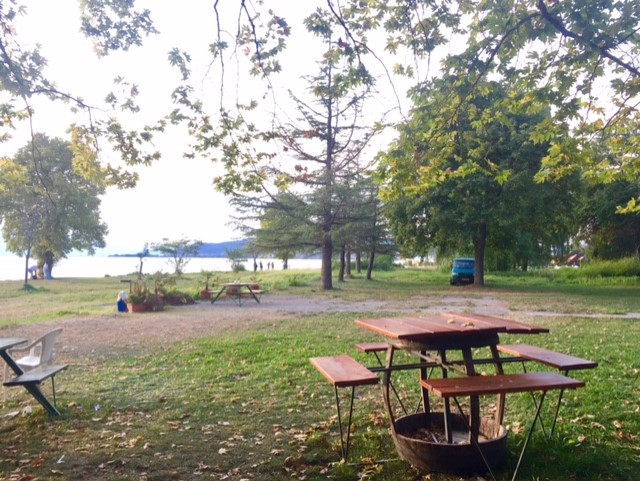 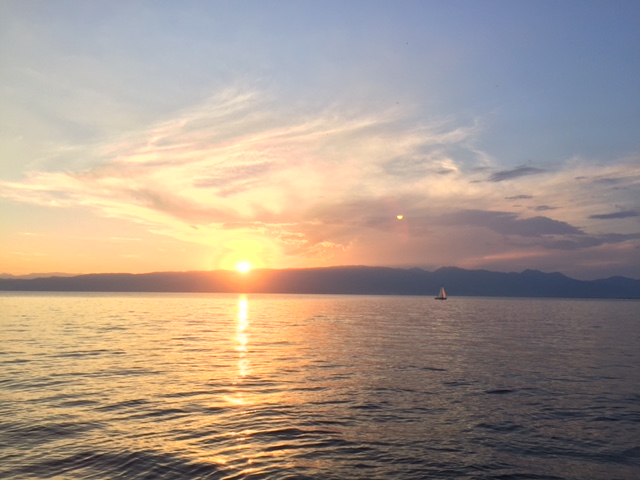 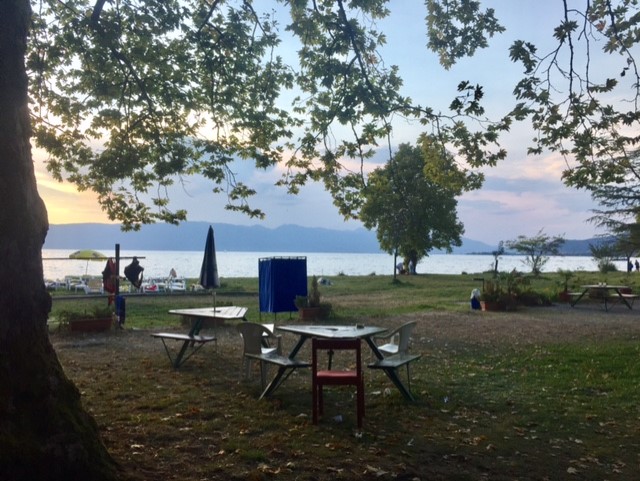 At only €10 for a night, Camp Andon Dukov is right on the lake with excellent parking spots among the trees. It's more of a restaurant with a large grass area than an actual camp site, but this small local nature was exactly what we were looking for. The restaurant was filled with locals, and only three other campervans turned up. It has good toilet facilities and the lake is right there for bathing. There's also an excellent bike path along the edge of the water to the main Ohrid town. Once setup we were reunited with Lulu and Tom over a dinner of hamburgers ordered from the restaurant (forgetting that in the Balkans Hamburgers don't always include the buns)...

It was about this point that we realised we really didn't have much idea about Macedonia as a country, and had been quite confused when checking our car insurance paperwork which referred to the country as "FYROM", which is not obvious at all given all other country codes are quite obvious (e.g. France is "FR"). So time for a little history. Macedonia is a former state of Yugoslavia, from which it declared independence in 1991. When it became a member of the United Nations in 1993, they where having an ongoing dispute with Greece over the use of the name "Macedonia", and was admitted under the provisional description the Former Yugoslav Republic of Macedonia (sometimes abbreviated as FYROM and FYR Macedonia). Although on car number-plates it is referred to as MNE. Remember that for your next pub quiz.

The next day Tom and Lulu managed to score a cheap Airbnb which was less than paying for the campground, allowed us to catch up and provided a great spot to get on top of some washing. Albeit when the Airbnb ad said it included a washing machine, they actually meant it included a grandmother in the apartment next door who would take your washing off you and return it washed and dried... what a service. Although needless to say she was not entirely impressed at the quantity of washing we had all accumulated over the previous weeks...

The next day we set out on a day trip to hike part of the National Park Galichica and made the steep drive to the Lipova - Vrv Magaro Starting point. We then set off on a 4km hike to the highest point of the national park (7.5km round trip), with the highest point reaching 2255 meters above sea level. We were told before we set off to try and avoid the mother brown bear and her two new cubs. Slightly concerned by hearing this, and armed with a stick and no real supplies, we set off. Needless to say Bidi and Lulu set the pace while Tom and Dan lagged behind... (guess who wrote that sentence)

While the forest in the beginning was slightly petrifying in terms of the bears, you quickly emerge in a safe open area and begin the steep ascent. Having already ascended quite far up with hill with Gary, the sheer elevation and views over the lake immediately reveal themselves. It's a simply spectacular walk with stunning views. There's also a loop around the top of the mountain allowing you to take a different path back down to the forrest via another valley (which is about 3.5km back to the car).

All up it's a pretty easy hike, albeit we definitely didn't bring enough food and the small pack of oat cookies we had turned out to be a life saver! On our drive back to Ohrid we stopped in Peshtani for a feed of various meats, mostly stuffed with cheese and with a side of chips. Not particularly healthy but exactly what the doctor ordered for our growling stomaches.

The next day we jumped on a ferry from Port Ohrid to St Naum, popping into the Bay of Bones on the way. At only €11 each this was a pretty reasonable way to explore these two areas, all whilst giving us a day off driving. The ferry hugged the eastern side of the lake and offered a beautiful panorama of stunning isolated bays that we wished we could have stopped to swim in.

We then pulled into the Bay of Bones; a fascinating insight into life on the lake over 3000 years ago. In ancient times, pile dwellers lived on a platform of approximately 10,000 wood piles tied to the bed of the lake. The settlement's remains were only discovered as recently as 1997, and following the excavation over the following decade, a reconstruction of the village has been completed based on how it would have looked from 1200 to 600 BC. The bay received it's name Bay of Bones following the large quantity of animal remains found there. 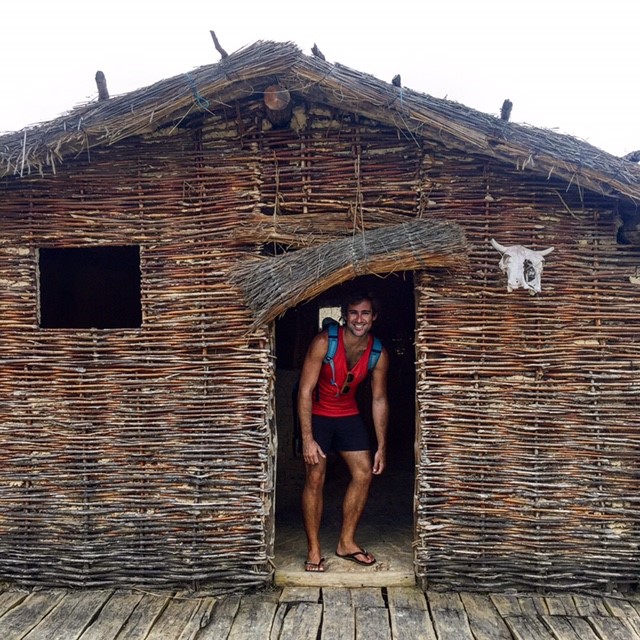 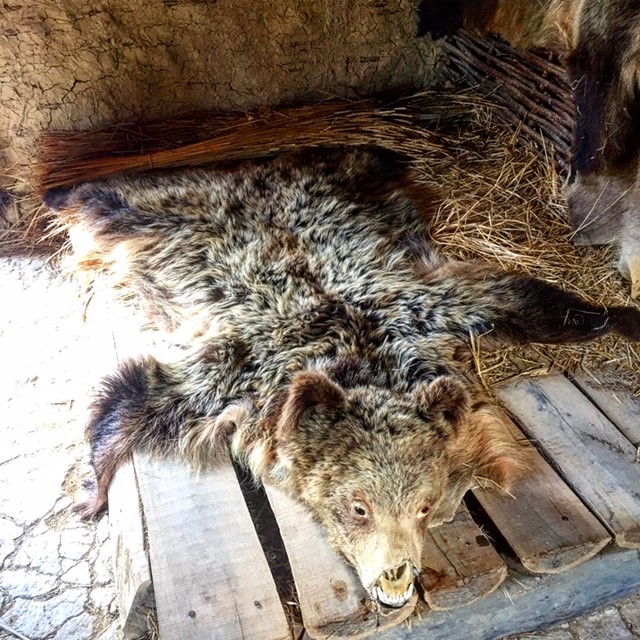 Next up was St Naum, a little bay situated in the south of the lake, only a stone's throw away from the Albanian border. Upon arrival we popped in for a swim and sunbath, before getting our culture on by popping up to Monastery Saint Naum. In all honesty we were all getting a bit desensitised to churches by now, but at least the peacocks were beautiful... even if they are apparently quite dangerous!

Following a walk through one of the creepiest campgrounds ever, we headed to the small island restaurant Ostrovo for a refreshing beverage. With most of the seating on small barges anchored to the island, it's quite a unique experience in the middle of a beautiful natural spring.

We then headed back to the dock to await our ferry. It was at this point Brigid saw her first actual swimming snake in the lake. Needless to say she would not have been swimming if she had encountered this earlier in the day, and was quite happy to jump aboard our ferry back to Ohrid.

After watching a stunning sunset over the Albanian hills, Lulu and Tom had kindly surprised Brigid with an early 30th birthday present to take us out for dinner to a epic little restaurant called Gladiator which overlooks the Ancient Theatre. We indulged in plenty of Macedonian specialties (sarmas and stews), and a lot of wine.

The next day we headed in the old area of Ohrid town. While the town is quite spread out, the original centre is quite small and can easily be negotiated in one day. First up we headed to the famous church St. John the Theologian on the point of Ohrid town (yes another church). It's unique placement elevated up on the point offers a 270 degree view of Lake Ohrid, and it's no wonder Instagrammers all go nuts for that same shot...

With the sun shining as usual, we then headed a bit further around the point to a private little bay called Labino Vista Point that Lulu and Tom had already visited. Unfortunately the word must have got out and it was not so private when we visited. It was however still isolated and magical.

Following a refreshing dip, we headed up to Tsar Samuel's Fortress, which is the castle on top of Ohrid town that is impossible to miss given the giant Montenegro flag waving proudly from the top of one of the towers. There's not too much to it, but you can walk right along the top of the walls, and given it was only €5 to visit, it's well worth it given the 360 degree views of the lake, Ohrid town and surrounding valleys.

We then all headed home to prepare for our travels the next day, and where we would have to say goodbye to Tom and Lulu for the final time on this trip, before eventually catching up later in the year all the way back in New Zealand.

As we had only spent one night camping near Ohrid, we wanted to spend a few more nights on the lake, albeit on the other side. Brigid chose a great little spot about 3km past Struga, where we dropped our friends off to catch their bus to Tirana in Albania.

Camping Sunrise turned out to be an absolute gem, where we could park right on the lake under the trees. The facilities were pretty good, and the WiFi was excellent - an important detail given there would soon be an All Blacks game on. How convenient Brigid would say. We ended up staying three nights and exploring the area. Following a reconnaissance run where Dan saw several dead snakes on the road (Brigid was thrilled about this) we grabbed the bikes and headed into the town of Struga itself.

One of the best parts about travelling is the unexpected - and this was one of the those moments. The town was bustling with locals, with little shops and markets everywhere. We found the town's main river canal lined with restaurants, and stopped for a few beers. A great vantage point for people watching without another tourist in sight.

Having spent just over a week in Macedonia, we had initially planned to spend another week exploring the country, heading up towards Skopje where Lulu and Tom had just come from, before then heading back to Bosnia via a more inland route. However they told us the roads were absolutely terrible, and so we decided instead to look after Gary and head back via the excellent Albanian and Montenegro roads we were accustomed to.

The next morning we packed up and continued our journey north. Just like that our time in Macedonia and Lake Ohrid was over. A really cool little spot and well worth a visit.

Next up, Bosnia and Herzegovina!

A Week in Montenegro