We were super excited to be in Croatia for the first time, and given the non-stop itinerary of Italy, this would be our first real chance for awhile to just park up somewhere we liked, relax and then not move until we got bored. Given Dubrovnik is an extremely small and insanely busy town, we found most campgrounds to be about 15 minutes south along the coast, around Kupari, Srebreno and Mlini. Looking at a number of reviews, Camping Kate grabbed our eye, and upon arrival we found a great spot with lots of space and shade for about €25 / night.

Furthermore as we had been eating out a lot in Italy, it was time to save some $$$ by cooking more of our own meals. Therefore as soon as we disembarked the Jadrolinija ferry, we headed straight to grab some groceries at the giant Konzum supermarket strategically placed about 100 meters from the ferry customs gate. We would later learn that is chain is EVERYWHERE in Croatia. There was also a bank ATM right out front - which was key given Croatia doesn't use €, and instead uses their own currency; Kuna (kn). As a start we got out about 2000kn (approx €270 at the time). Overall Croatia is actually quite VISA friendly, although you will need cash for the small local stores and campgrounds.

TIP: Avoid non-bank ATMs, even if they are conveniently located, as their rates are usually well below official bank ATM rates. Also, if you are presented with the option of paying in your country's currency or the local currency, it's often better to choose the local currency as your bank's exchange rate is normally better than the stores.

We also had a small issue with the Campingaz R907 replacement bottle we had picked up in Italy. Luckily we were recommended this INA Gas Station which helped fix the seal for free, which was important because you can't buy or replace these in Croatia. However we did find out that this store would refill empty Campingaz bottles (and much cheaper than Italy) as they had the appropriate adapters. So if you are passing through Dubrovnik with one of the bottles, or need a refill for probably any type of bottle, we recommend this place thoroughly.

As soon as we setup at Camping Kate, we headed down to what would be our local beach to blob out. We would have plenty of time to explore this beautiful and sunny country!

We were simply amazed by how crystal clear and blue the water was. We then eagerly dived in to what would be our first swim in the Adriatic ocean... and oh boy was it... cold. It was FREEZING... well that wasn't expected. It was much much colder than the Mediterranean... anyway this would turn out to be a blessing given that for some reason the sun was scolding. Hotter than we had felt anywhere on the trip so far (even though weather apps showed the temp was nowhere near the highs we had already experienced). Maybe a small gap in the ozone layer? We were actually both cowered underneath our umbrella (best €7 spent ever). So frequent dips to refresh were essential.

We spent the next few days with a process roughly following: 1) bacon & eggs, 2) swim, 3) read, 4) lunch, 5) beers, 6) swim, 7) read, 8) dinner and 9) Netflix. Pure bliss. Then, feeling the need to explore, we started to venture along the coast. This was our first real glimpse of how much tourism money was flowing into Croatia... brand new esplanades, houses and shops everywhere. We also stumbled upon a game of water polo - one of the national sports of Croatia. This was between the local area and some poor distant rival, who was being destroyed on the scoreboard (although we admit we really have no idea at all how the scoring works). There were plenty of restaurants all selling the same things to tourists, and we grabbed a feed of fresh calamari for approx €12 at one of these (although not particularly memorable) - and this was the only meal we didn't cook the whole week we spent here.

Feeling the need to burn off some of the beer, Dan went for a run further along the coast and stumbled upon a very unique area and a fresh reminder of how recent the Croatian War of Independence was... 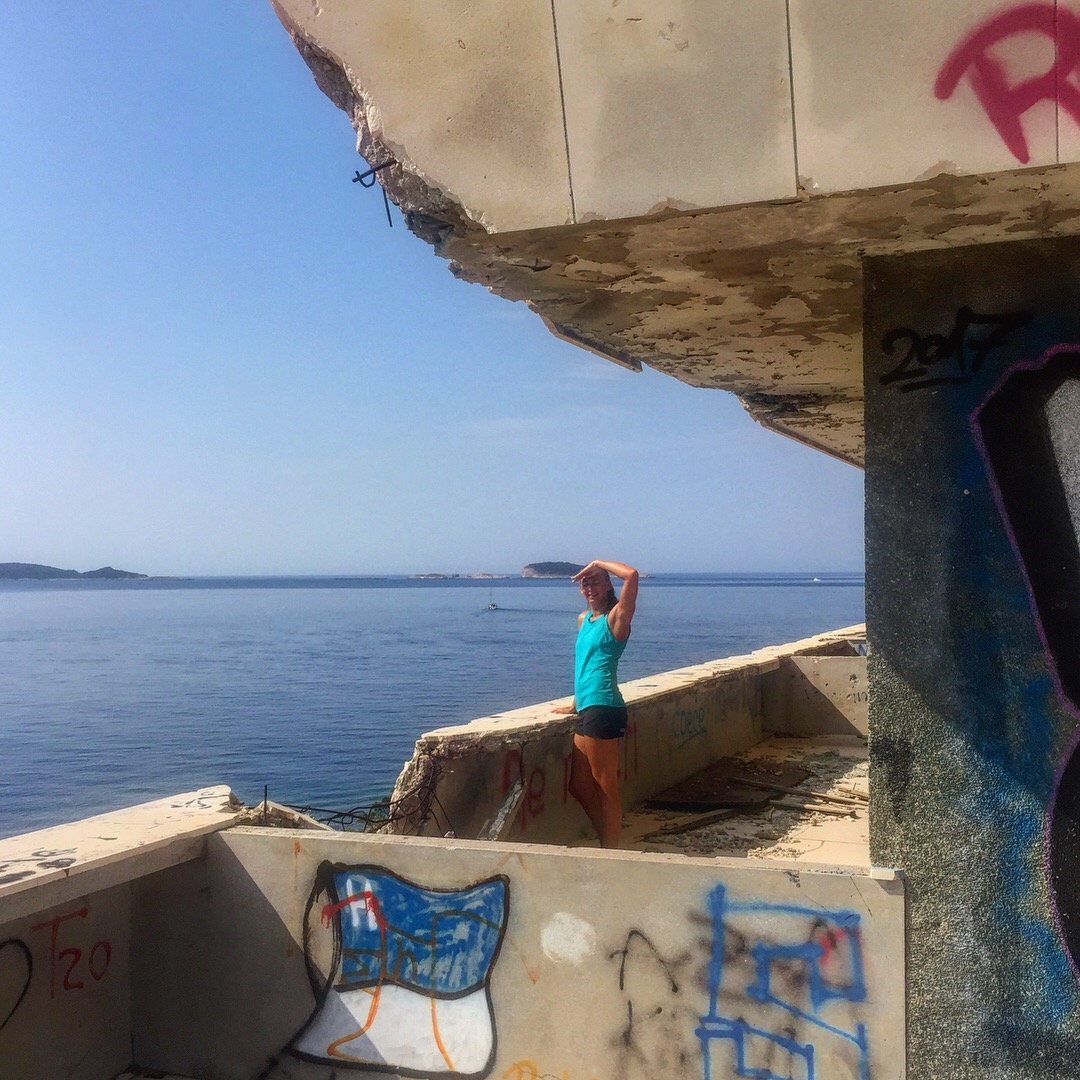 Known as Croatia's bay of abandoned hotels, the first Grand Hotel opened to tourists in 1919 and by the 1960's it became the dedicated holiday resort primarily funded by and serving the JNA (Yugoslav People's Army). Over the following two decades, five more hotels were built. In the summer of 1991 when the Croatian War of Independence broke out, the JNA shelled 'their' own resorts, as well as essentially destroying the interiors with phosphorous grenades. This was both due to the fact that Croatian fighters were taking shelter there, but also a spiteful "if we can't use them, nobody can".

Over the last three decades, the hotels have all been stripped of virtually everything except their concrete skeletons. You can actually, and very easily, make your way up to the top of each of the hotels. There's no fencing, and they at least appear structurally sound. As New Zealanders we find it so unusual to be allowed near anything with so many potential injuries (even a one foot drop in NZ would have a fence). Nevertheless we had read another blog here where they had ventured inside and upward. We had also spoken to some other campers from England staying in our campground, who said they found exploring the higher floors of the ghost hotels to be fascinating. Thus we had to check them out. 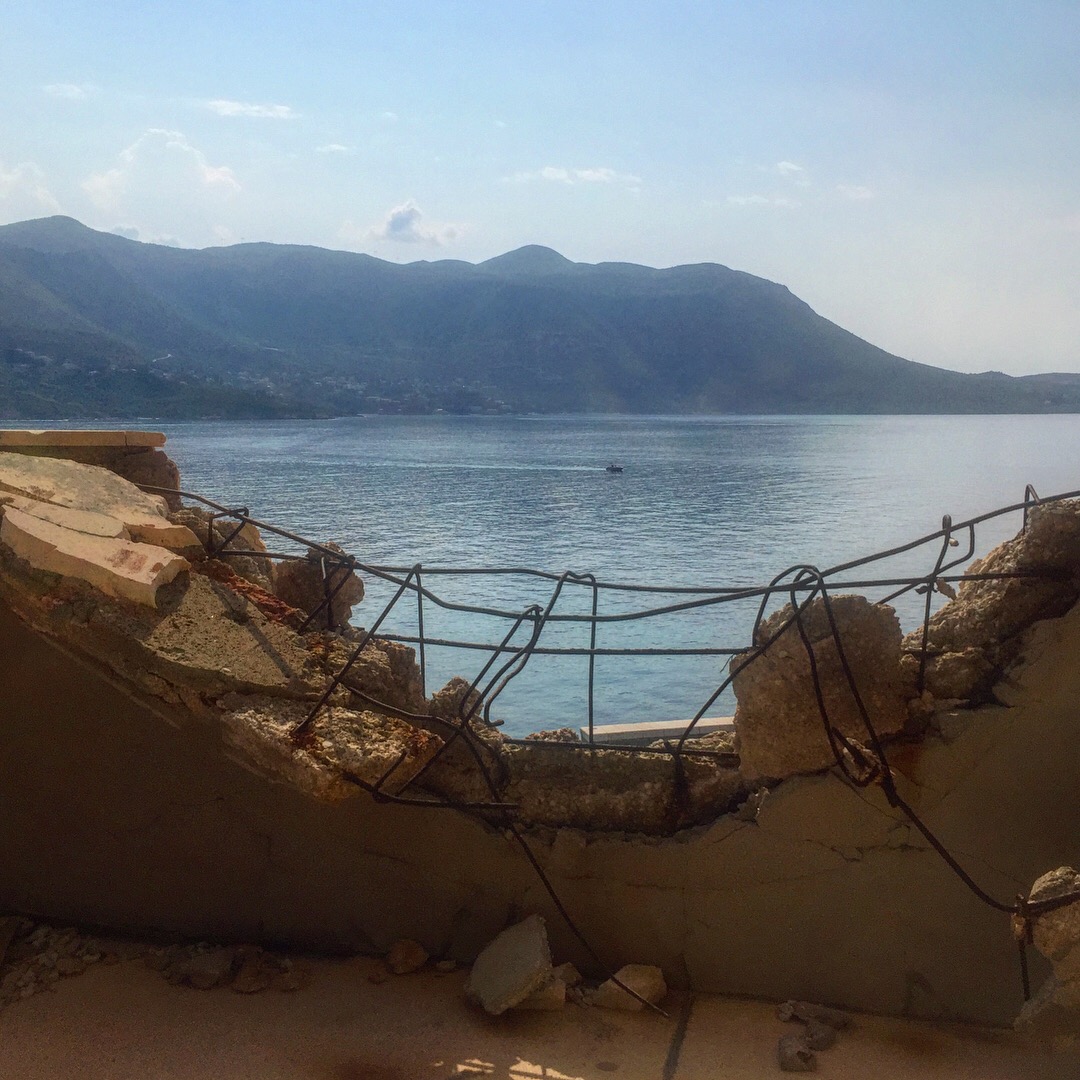 It's an airy scene walking through all of these abandoned hotels and looking back down at the crystal blue bay and beaches that are of coarse the primary reason they were placed there in the first place. The beaches are obviously still used, and crowded with tourists. This leads to a strange contrast, steering down at the sunbathers and inflatable flamingos, through giant shell holes in the side of the buildings. It's now a time of peace, but there certainly still many scars that remain.

After a few days exploring the area, and relaxing on the beaches ourselves, we felt our batteries were sufficiently charged in order to play tourist again, and venture into the one and only, Dubrovnik...

There are very frequent ferry services between Mlini and Dubrovnik, with tickets sold both at the small dock, and even directly at the campground. There are also a few different companies to choose from. We headed in around 10am and the ferry service itself was nice and easy. More importantly, it meant our actual entrance point to the famous city was the old port in the south-eastern part of the city, which offers a simply stunning first impression and immediate immersion into the fantasy-like nature of Dubrovnik.

It's immediately obvious why it was chosen to represent Kings Landing in Game of Thrones, as well as add to the magic of foreign worlds in Star Wars The Last Jedi. Probably the biggest fantasy of them all is the INSANE price of EVERYTHING within the old town walls. As soon as we arrived we needed an espresso (€4), noticed a few restaurant menus which we would definitely not be eating at (prices double that of Florence), and headed to walk along the top of the walls (€20 each). Having browsed the main "things to do" here, the city walls walk was an absolute no-brainer, even at that ridiculous price (which I'm guessing their pricing strategist worked out...). It's a cool way to immerse yourself in the period, get your bearings for the city, and provides unparalleled views of the city and it's surroundings. Dan's also obsessed with anything that remotely resembles a castle.

Having spent most of our day budget on that one activity. We headed just outside the walls to grab some breads, meats, cheeses and beers at Konzum for a fraction of the cost we would have spent on anything inside the walls. We then headed out towards Fort Lovrijenac, where there are some picnic benches on the hill overlooking the old town of Dubrovnik. An excellent spot for lunch!

We then went for a walk around the neighboring bays and found a good little spot for swimming, as well as wandering through Park Gradac which provided a great view out to sea and along the coast. Finally we headed back into the old town to the famous Buza Bars sticking out from the wall straight onto the ocean (here and here). The access doors from inside the wall on to the rocks are quite difficult to find in the maze of small dead-end streets that makes up this part of this city - so it's worth persisting to find them. We had also read drinks there were super expensive (beers like €6-7), so we took our own €1 beers from Konzum down on to the rocks (which are free game as they are not part of the bar itself). The sea was pretty rough, so whilst we would normally have jumped in for a swim here, we just chilled on the rocks instead. A great little spot to finish up our day playing tourist.

We then headed back to grab a ferry from the old port, and for some reason this boat had free drinks on board. So we grabbed a few wines (they were awful) and enjoyed the sea swells on the much rougher journey back. Needless to say at lot of the tourists on board where not as used to rough seas.

Eventually we ended back in Mlini for a well earned sleep, and to prepare Gary for the next day's adventure, where we would pickup our friends Tom and Lulu from Dubrovnik and then head across the southern border towards Tivat in Montenegro. Alas our first wee taster of Croatia had been excellent, and we would now traverse several Balkan countries before returning back to Croatia later in our trip. But for now, bring on Montenegro!